Due to our failing attempt to keep up with the present administration’s attacks on the natural world, wildlife, endangered species, air and water, as well as laws put into to place for protection thereof, we are a bit late posting this “take action” post.

The Prince of Wales Landscape Level Analysis (POWLLA), green-washed by the Forest Service as being an effort to “improve forest ecosystem health” is, in reality, a massive and destructive timber project. Your consideration of this extremely important matter is appreciated.

Over 200 million board feet of old-growth Tongass National Forest timber on Prince of Wales could be logged over the next 10 years. This number could be half to one-fourth of that amount, possibly (with your help) none at all. Which option the U.S. Forest Service chooses between now and the beginning of next year is open for public input, and your comments are requested by June 18, 2018. The federal agency released a draft environmental review for the Prince of Wales Landscape Level Analysis earlier in April beginning the 45-day public comment period.

Your electronic comment on the POW LLA Project is required to gain standing to object to the project later in the NEPA process, and must be received during the specified public comment period.

In 2016, the U.S. Forest Service committed to transition away from logging old-growth on the Tongass, an island which has alread undergone intensive industrial-scale clear-cut logging. Not only is clear-cutting in the Tongass dead wrong, but the agency had also arrived at the conclusion that there is no future in the tax-payer subsidized, clear-cutting of these ancient and magnificent forests (timber sales in the Tongass, on the average, cost tax-payers 21.7 million dollars per year).

Deforestation generates nearly a quarter of all the world’s greenhouse gas emissions.

The draft Environmental Impact Statement has a no-action alternative, under which no work would be done (alternative 1), along with three other action alternatives (alternative 4 was not carried forward), with a range of timber harvest. One proposal, which was developed in response to public comments (alternative 5), allows for annual old-growth harvest of 25 million board feet in the first five years with another 15 million board feet in the following five years, equalling a total of 200 million board feet over the first decade. This alternative includes recommendations from the timber industry, as well as from tribal and community representatives. The POW Landscape Assessment Team offered recommendations in 2017 which included a continued supply of old-growth timber to local mills. Believe it or not, this alternative is the lowest level of harvest.

Alternative 2 is the project’s proposed action and would log the largest amount of old-growth forest.

Alternative 3 begins by saying that “it addresses public concerns from past timber harvest and road construction and its effects to wildlife habitat, watershed function…” but don’t let that fool you because this alternative harvests the second highest amount of combined old and young growth. See chart below:

More information and a full explanation of the four alternatives offered in the draft EIS can be downloaded here.

The Tongass National Forest is one of the few remaining old-growth temperate rainforests worldwide with breathtaking stands of ancient trees, many of which are approaching 1,000 years in age. The forests provide vital habitat for many species including Alexander Archipelago Wolves and their prey, Sitka black-tailed deer. Over the course of just 50 years, commercial logging harvested a shocking amount of the contiguous high-volume old-growth forest on Prince of Wales, a total of 94 percent by 2004.

This project, if realized, would authorize the harvest of virtually all of the old-growth forest that remains on lands open to logging, and would clear-cut well over 200 million board-feet of old-growth forest, threatening to destroy large swaths of habitat essential for wildlife. Already, the average distance to roads is just 1.7 miles on the island leaving little secure habitat; this project will create additional new logging roads, increasing human access and the associated hunting and trapping pressure on the imperiled island wolf populations and their primary prey, Sitka black-tailed deer.

Logged land supports fewer deer than virgin forests, and in turn fewer people and fewer wolves. Proposed increases in logging on the island will only exacerbate the situation; as the deer population declines the wolves will be blamed. Blame leads to the killing of wolves.

Cover is important for survival for Sitka black-tailed deer: to reduce energy expenditures for thermoregulation and for locomotion during periods of high snow cover, to limit food burial by snow, and to allow for escape and hiding from human and nonhuman predators (Nyberg et al. 1989). 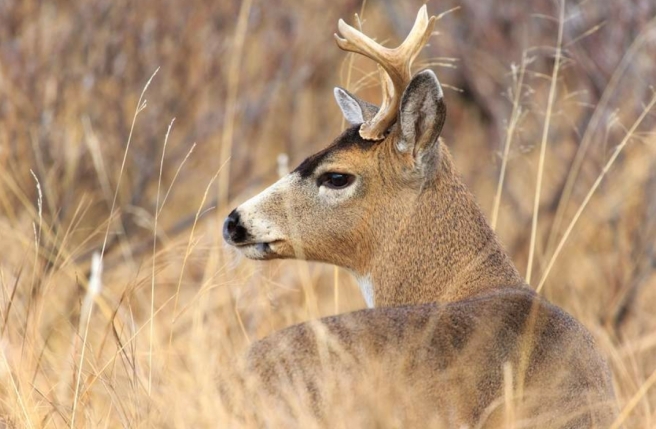 Throughout most of their range, the habitat of Sitka black-tailed deer has been affected by extraction of timber. Clear-cuts produce large amounts of biomass in summer but offer little snow interception in winter, while the dense canopy of old-growth forests provides snow interception, as well as a litter of lichen and twigs. Several studies have demonstrated that snow can be a major factor influencing winter survival of Columbian black-tailed deer and Sitka black-tailed deer (Klein and Olson 1960; Bunnell et al. 1978; Jones and Mason 1983), both through the reduction of available forage (Harestad et al. 1982; Hanley and McKendrick 1983; Hovey and Harestad 1992) and because of the increased energetic costs of movement (Parker et al. 1984).

Black-tailed deer sinking depth (Bunnell et al. 1990a,b) was greatest in clear-cuts and intermediate in 20-year-old stands. It was lowest in old-growth and 80-year-old stands. The energy cost of moving through 25 cm of snow is about 2.5 times that of moving through 10 cm and increases as snowpacks become deeper (Parker et al. 1984). In southeast Alaska, when snow depth in the open was >15 cm, black-tailed deer concentrated their activities in the highest volume old-growth stands available within their home ranges (Schoen and Kirchhoff 1990). In fact, during these severe winters, older forests were very important for the survival of deer (see Harestad 1980, 1985; Schoen et al. 1985), and persistent snow caused significant deer mortality. A severe winter with heavy, persistent snow in 1999 caused a large increase in the number of starvation-related mortalities of deer compared with the mild winter of 1997–1998 (Farmer and Person 1999).

What is left of the old-growth on POW is critical habitat for wildlife, and should be exempt from any timber sale programs. Please speak out against this proposal. 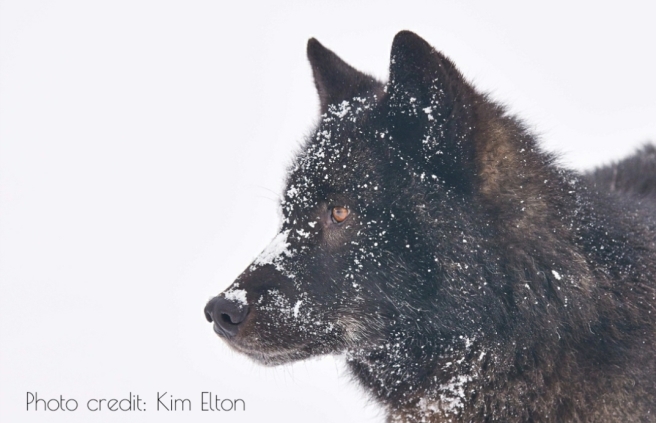 Your voice makes a difference. Here’s proof: Back in 2016, we asked you to comment on a proposed timber sale on Wrangell Island. The preferred alternative would have allowed two thirds of the project area to be selectively harvested and a third clear-cut, producing about 73 million board feet, from approximately 5,290 acres. But, after considering final objections, the timber sale changed drastically, and was reduced to just a tiny portion of the original proposal. The Forest Service put just 5 to 7 million board feet up for bid.

Below find a sample letter which may be utilized as is or personalized, please speak out for the forests in the Tongass, critical habitat for wolves. The Forest Service’s continued pursuit of old-growth timber sales like Big Thorne, the timber sale on Wrangell, and the present proposal must stop. 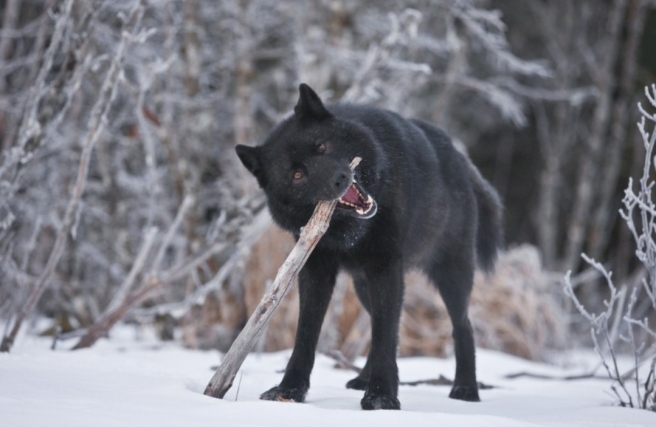 (Please copy below to paste/personalize and send in link provided at end.)

Thank you for the opportunity to review and comment on the Prince of Wales Landscape Level Analysis.

I am writing to express my sincere objections to the proposed sale of an incredible amount of old-growth forest habitat for clear-cutting in the Tongass National Forest. The past 60 years of industrial logging has targeted the rarest and most productive stands of old-growth forest, thus reducing the highest-volume contiguous old-growth by a staggering 66 percent forest-wide. On POW, 94 percent of the contiguous large-tree old-growth stands have been logged since 1954.

The proposed volumes of logging in each alternative of the POWLLA project, with the exception of the no action alternative, are unsustainable levels of harvest; levels that will adversely impact wildlife such as the Alexander Archipelago wolf, Sitka black-tailed deer, northern goshawks, and many other old-growth dependent species, and further damage riparian habitat for salmon and other aquatic species.

Logging and milling of Tongass timber supports very few private sector jobs. When timber from private and state lands is combined, the timber industry in Southeast Alaska still accounts for less than 1 percent of the region’s jobs and earnings. It is long past time for the Forest Service to shift its Tongass timber program to one that implements appropriately-scaled timber sales that will support the regions small mills, with local manufacturing of sustainable young-growth forest products. Additionally, young-growth projects should be designed to improve forest health and function, and should avoid impacts to Southeast Alaska’s strong economic base of tourism. Tourists and recreationists do not travel to the Tongass to see large swaths of clear-cut lands; they come to take in the scenic beauty, in-tact landscapes, wildlife, and a healthy wolf population.

The Forest Service has identified roughly 65 watersheds in need of significant restoration as a result of past logging and road-building activities, and estimates it will cost $100 million to address the backlog of unmet watershed restoration needs. Much of this unmet restoration need is located on POW, and should not be compounded by new timber projects in sensitive areas.

The overwhelming weight of the scientific community recognizes the extraordinary importance of what remains of old-growth forests, and has repeatedly called on the Forest Service to quickly transition away from, and end its old-growth timber sale programs.

The Forest Service’s continued pursuit of old-growth timber sales like Big Thorne, Wrangell, and the present proposal, outlined in the Prince of Wales Landscape Level Analysis, must stop. All old-growth logging causes irreparable harm to the Tongass, but the timber sale proposals in the POWLLA project would be remarkably devastating. Areas that have been previously clear-cut, and grown back as dense thicket, can now only support 2 deer per square kilometer, where prior to clear-cutting they could support 20. Because logged land supports fewer deer, and thus fewer people and wolves, the wolves will be blamed for declining deer populations, which, in turn, leads to the killing of an integral part of the tourism drive — wolves. Large, destructive old-growth clear-cuts are precisely the kind of projects the Forest Service needs to leave in the past.

Again, I strongly object to the immense timber sale currently proposed as part of the POWLLA project and support Alternative 1, the “no action” alternative. It is long past time to end the industrial-scale old-growth logging on the Tongass that has greatly damaged this extraordinary public treasure.

Thank you for your time and consideration of my comments,

Tap here to send your e-mail.

As always, thank you very much for your help.

Visit our Creative Arts and Work shop here for t-shirts, wall art and a variety of home decor. Up 100% of our profits are donated to organizations working towards the protection of wolves and our environment.
Consider purchasing a greeting card (we have a small variety). The 20 cents profit from each card or postcard helps us provide advertisement-free content. Tap the image below for more information.