Wyoming’s wolf plan is the very antithesis of a strategy for an ecologically vital, formerly federally protected species.

Wyoming has proposed increasing the kill quota in the “Trophy zone” to 58 animals; an increase of 32 percent over last year’s quota of 44. A record high since wolf reintroduction 23 years ago. At the same time another plan being recommended is to increase license numbers from one to two, per individual, for a calendar year. The increase is pending Game and Fish Commission approval at it’s July meeting.
Game and Fish’s proposal is available for review and comment. Written and online comments will be accepted through 5:00 p.m., June 4th.

Below you will find a sample letter which may be utilized “as is” or personalized. Be sure to include the reference links below your signature. Please send your email as soon as possible.

Re: Proposal to increase wolf quota in trophy zone.

It is already disconcerting that in Wyoming wolf hunting is permitted 365 days a year across 85 percent of the state. It is also appalling that in this area wolves are looked upon as “shoot on sight vermin.” Once essentially extripated from Wyoming, this species can be slaughtered, often violently, by practically any means: guns, snares, explosives, trucks, and even via snowmobiles. It is also shocking that anyone (in most of Wyoming) can kill wolves without a hunting license, putting at great risk a wildlife species whose populations in the contiguous United States remain at a tiny fraction of what they once were. The other 15 percent of the state, concentrated around the Jackson Hole area and the Tetons, the tiny area where wolves and other predators are allowed to struggle to survive, the animals are also persecuted for nearly 3 months of the year.

During the 2017 hunting season licensed hunters killed 44 wolves in the so-called trophy zone; 12 alone within the first 40 hours of the season. Add to that, at least 48 wolves are estimated to be killed annually from non-hunting human impacts (1). This calculation, of course, does not include unreported kills.

I strongly oppose the proposal to increase the kill quota in the “trophy zone to 58 animals (an increase of 32 percent over last year’s quota of 44; a record high since wolf reintroduction 23 years ago). I am also dismayed that the state is not only considering an increase in license numbers from one to two, per individual, for a calendar year, but that wolf hunt area boundaries are being redrawn, and quotas boosted because “the Gros Ventre area’s elk, and the Whiskey Mountain’s bighorn sheep are shifting their winter ranges.” In both cases there is little evidence that wolf predation is driving populations down. Rather than relying on science-based data, Wyoming seems to be using wolves as a scapegoat for a more complex problem (2).

Should the justification for this proposal be livestock losses — as according to USFWS “wolves killed a record number of livestock in 2016” (154 cattle, 88 sheep and one horse). This “record number” is just 20 more depredations than the previous year. The price: Wildlife “Services” killed 113 wolves, up from 54 “removed” the previous year. Shocking.

Losses to depredations are negligible when compared to losses from disease or weather. 37,550 sheep died that same year from causes which did not involve predators. Non-predator cause of death in adult cattle accounted for almost 98 percent, primarily due to respiratory diseases; calves 89 percent. From the miniscule percentage of cattle/calves killed by predators wolves were to blame for just 4.9 percent; domestic dogs were responsible for over twice as many losses than wolves, 11.3 percent (3).

The occasional threat to livestock and small percentage of financial losses due to wolf depredations should not create such antipathy toward the wolf, an animal desperately needed to balance elk populations, which, in turn will curtail damage to important biotic factors.

Since the majority of lands in the “trophy zone” are federal lands, and as the majority of Americans are opposed to the “take” of wolves on their public lands, an increase in the wolf quota in the “trophy zone” area to 58 animals is simply unacceptable, as is an increase in license numbers from one to two, per hunter/trapper, for a calendar year. I ask that you reconsider this proposal. In my mind the quota for this area should be reduced to zero, allowing the animals to live in peace; isn’t it bad enough (for me, unacceptable) that wolves are sacrificed to appease ranchers grazing livestock on our public lands, which include nearly half of all lands in Wyoming.
Thank you for your time and consideration of this important matter,

Visit our Creative Arts and Work shop here, where up to 100% of profits are donated to organizations working towards the protection of wolves, wildlife and our environment. 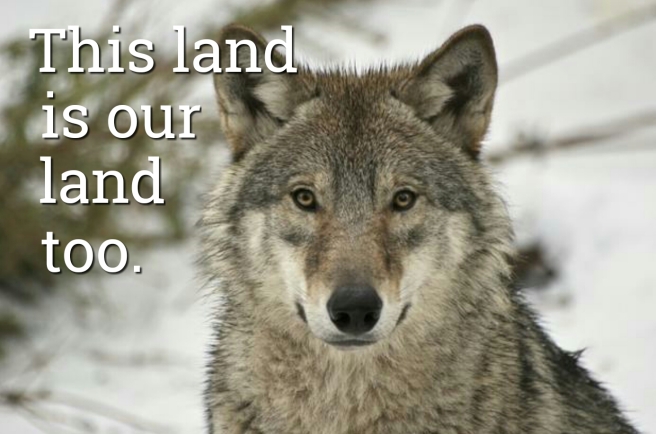 Environmentalism and animal rights advocacy. Standing for wildlife, with an emphasis on wolves and endangered species; defending our imperiled Mother Earth through art and advocacy. We encourage a view of Nature that is not impaired by the glass of our knowledge. View all posts by intheshadowofthewolf