One of the two remaining East Fork wolves of Denali National Park was shot this past weekend by a trophy hunter at a bear baiting station just outside park boundaries.

If this sounds eerily familiar, that’s because it is. This is just what happened exactly one year ago, when the pregnant female of the East Fork group was shot by an Outside trophy hunter at a bear baiting station in the same area. The loss of that one pregnant female wolf in 2015 led to the disintegration of the entire East Fork group, also called the Toklats, from 15 wolves down to just two this spring.

And now, with last weekend’s shooting of the radio-collared gray male dubbed “1508 GM” by park biologists, it appears the East Fork is down to one lone black wolf. 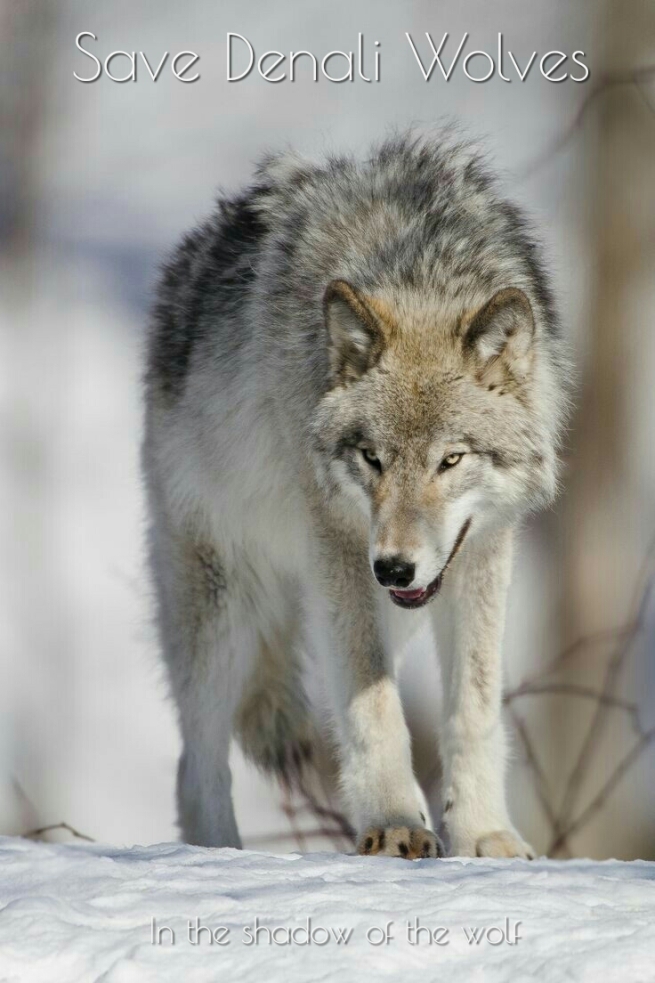 This is a historic loss. It leaves one remaining member of the wolf group studied by Dr. Adolph Murie, the subjects of his groundbreaking 1944 book, “The Wolves of Mount McKinley.” It leaves one from the group that Dr. Gordon Haber continued to study for another 43 years, until his untimely 2009 death in a plane crash while studying wolves.

This one family group of wolves was studied for a continuous 70 years, making them, along with the community of chimpanzees studied by Jane Goodall, the world’s oldest-known, longest-studied large mammal social lineage in the wild. It doesn’t take a rocket scientist to see that this gave the East Fork wolves inestimable scientific value.

But the state of Alaska apparently has no interest in such rare scientific value, no pride in a scientific record rivaled only by that of Goodall’s chimpanzee research. The state has allowed this valuable public wildlife resource to be decimated by hunting and trapping for decades. And the National Park Service has clearly failed its mandate of protecting natural processes in the park.

The state also seems to lack regard for the hundreds of thousands of visitors each year who come to Denali to see wolves, many of them Alaskans. With the loss of the East Fork group in 2015, and the Grant Creek group in 2012 (also from hunting/trapping along the park boundary), viewing success of Park wolves plummeted. Almost half of park visitors were seeing wolves in the park until these deaths; now only about 5 percent are so fortunate.

The East Fork wolves traditionally denned near the Murie cabin at Toklat River, and were the wolves most visitors saw throughout the 1980s and 1990s — until a series of deaths at the hands of humans beginning in 2001 compromised the family group. With just a half-dozen inexperienced yearlings left, they shifted their territory and became even more susceptible to trapping and hunting on the northeastern boundaries of the park. They remained one of the most-viewed family groups until last spring.

The fault for the demise of these world-famous wolves rests squarely on the shoulders of Alaska Department of Fish and Game Commissioner Sam Cotten. He may not have pulled the trigger, but he permitted it…

Share your thoughts with the Commissioner, speak up for Denali National Park Wolves:

Two sample emails (the second email addresses the situation with the loss of the remaining East Fork wolf and pups) please personalize:

The wolf population in Alaska’s Denali National Park and Preserve has plummeted to its lowest level in the park’s historical record, due in part to wolf hunting and trapping inside the preserve and on state lands along the park boundary. I strongly urge that you immediately halt all wolf hunting around Denali National Park, as well as secure a permanent no-kill buffer along the park boundary from the State of Alaska.

The park’s wolf population has dwindled from 143 to 48 in less than eight years. This year the population has been further reduced. These losses have not only diminished the chance to see wild wolves, but have also undercut the integrity of the entire ecosystem—much of which is designated wilderness. While the park’s primary purpose is to “protect intact the globally significant Denali ecosystems,” it is certainly failing to do so.

The continued and heartless slaughter of Denali wolves has disrupted their society and destabilized the packs, which in turn completely compromised not only the hunting capabilities, but the very survival of remaining members. Hunting and trapping most often removes key pack members or alpha wolves, which will usually will lead to the disintegration of an entire family group. For example, in 2012, the trapping of the pregnant alpha female wolf from the Grant Creek group led to the group declining from 15 wolves to only 3 that year.

Now, in 2016, one of the two remaining East Fork wolves of Denali National Park was shot this past spring by a trophy hunter at a bear baiting station just outside park boundaries. Because of the shooting of a radio-collared gray male (dubbed “1508 GM” by park biologists), the East Fork “pack” is/was down to one lone black wolf who had pups; now presumed dead.

The State of Alaska has repeatedly denied public petitions over the past eight years asking for an end to wolf hunting/trapping in the Preserve and around Denali and a replacement of a buffer zone. Wolves have all but completely vanished from one of the nation’s largest and most iconic national parks. Alaska has efficiently, and shamefully, squelched visitors chances of seeing wolves.

Please advise the superintendent of Denali National Park to halt all wolf killing in the entire park and preserve, and create a permanent wolf buffer zone.

Allowing the demise of Denali’s wolves is literally shooting the goose laying the golden (tourism) eggs.

Thankyou for your time and consideration of this extremely important matter,

It is my understanding that the pups from The Toklat pack were observed alone, and without a pack presence, earlier last month when National Park Service pilots flew over their den’s location.

With the shooting, earlier this year,  of the radio-collared gray male dubbed “1508 GM” by park biologists, it appeared that the East Fork was down to one black female wolf attempting the near impossible: caring for her pups alone.

Mismanagement within the state park, and along the borders, has created a situation causing the demise of numerous beloved Denali wolves, creating a historically low wolfpack population in the area.

Now we are left with one lone survivor (now “missing”), who cannot tend properly to her pups.  Without another adult to hunt and feed the nursing mother, the pups will likely starve to death. Chances are highly probable that these pups have not survived as the den, recently, has been observed unoccupied.

This horrific sequence of events likely spell the extinction of the world-renowned East Fork family group, all because Alaska failed not once, but twice, to do the judicious and intelligent thing, and close the area.

Enough is enough. Protect Denali’s wolves with a no hunting/trapping buffer zone.

Thankyou for your time and consideration of this extremely time sensitive matter,

Please also send a copy of the above emails to Governor Walker here.

Sign the petition from Marybeth Holleman – Coauthor of Among Wolves: bit.ly/28SQSsq

Copyright © 2016 [COPYRIGHT Intheshadowofthewolf, name and webpage]. All Rights Reserved. No part of this publication may be reproduced or distributed in any form or by any means, or stored in a database or retrieval system, without the prior written permission of the publisher.