A death sentence for the only existing red wolf population in the wild.

The Trump administration announced a proposal, on June 27, 2018, with a draft Environmental Assessment containing several alternatives which would shrink the habitat of the last remaining endangered red wolves in the wild, and would allow landowners more leeway to kill any of the animals that stray onto private property. The government plan would essentially result in a death sentence for any wolf that wanders off of federal public lands. Federal officials estimate it will take until November to finalize the rule after a required public comment period. Until then, red wolves are governed by existing rules and other restrictions ordered by a federal judge (In 2016, U.S. District Judge Terrence Boyle issued a preliminary injunction that essentially halted all authorizations for landowners to trap or kill the wolves).

The Service will consider all comments on the proposed 10(j) rule and draft Environmental Assessment which must be received or postmarked by that date. Information on how to comment can be found at regulations.gov under docket number FWS-R4-ES-2018-0035. A brief summary of the proposal can be found here. For more information or if you should have any questions please contact Phil Kloer, Public Affairs Specialist by email here, or by phone: (404) 679-7299.

Please remember that five hundred identical form letters can count as just one comment. What agencies are looking for is a “substantive comment” that clearly communicates and supports its claim.

Below find background information, and a sample email, please personalize and submit your comment on the proposed rule here (If submitting a comment during the August time frame, do so here). Read the draft Environmental Assessment here.

The red wolf was once abundant throughout the southeastern United States, but human persecution—including government sponsored eradication programs led to its near-extinction by the 1960s. Animals from a remnant red wolf population from Louisiana and Texas were removed from the wild for a captive-breeding program, and the wolf was declared extinct in the wild in 1980. That captive breeding program supplied a reintroduction effort in 1987 in the Alligator River National Wildlife Refuge in North Carolina, and is the only extant wild red wolf population, which peaked at about 150 wild red wolves in 2005. Thereafter the red wolf population began to decline, primarily due to anthropogenic causes, predominately gunshot mortalities. In 2014, the Service began dismantling the Red Wolf Recovery Program, and in September 2016, the agency recommended drastic changes to the Red Wolf Recovery Program, including restricting the red wolf population to federal lands. Now we are faced with a proposal that not only restricts the red wolf to public lands, but also eliminates take prohibitions on private lands.

Despite a five-year status review, acknowledging that the red wolf could be extinct in the wild within eight years, a scientifically unsound proposal is offered which would fast-track the animals extinction in the wild.

The primary threats to the red wolf are hybridizations with coyotes, shootings (which caused an estimated 30 out of 65 red wolf deaths from 2012 to 2015), and overall—the way the species is managed. Illegal shooting deaths occur when wolves are mistaken for coyotes, but before a federal court stopped the Fish and Wildlife Service from issuing permits to shoot wolves, the animals were legally shot and killed under numerous circumstances. By reducing population size, gunshot mortality has the potential to increases red wolf inbreeding and promote red wolf hybridization with coyotes, a key threat to the genetic integrity of the wolf. Disease is a great concern and has the capacity to wipe out the single existing red wolf population in the wild, especially given that coyotes expose red wolves to a wide variety of wildlife pathogens found in the Southeast.

Most people support red wolf recovery, but negative attitudes of vocal opponents have led to increased poaching as well as pressure on the Service to dismantle the red wolf program, which also constitutes a threat to the species’ survival and recovery. During the 2017 USFWS public comment period regarding red wolves, over 99 percent of 54,992 submissions supported recovering the red wolf in the wild in North Carolina.

To: U.S. Fish and Wildlife Service

After centuries of systematic persecution, the red wolf (canis rufus) exists in the wild only as a small population in eastern North Carolina. Formally classified as critically endangered by the IUCN in 2008, the declining population, which peaked in 2005 at approximately 150 individuals, has reached an all time low of just 35 individuals in the wild.

Despite a five-year status review acknowledging that the red wolf could be extinct in the wild within eight years, a scientifically unsound proposal is offered which would not only shrink the management area by 90%, but would also remove protections from any wolf that wanders beyond the area’s boundaries, allowing landowners to kill members of the only extant wild red wolf population without repercussions.

Because this reduced management area can only sustain approximately 15 wolves, implementation of this proposal will not only lead to inbreeding, but will increase the likelihood of red wolf hybridization with coyotes, thus disrupting genetic integrity. Another serious threat is disease, which has the capacity to wipe out the population living in the wild, especially given that coyotes expose red wolves to a wide variety of wildlife pathogens found in the Southeast, and because the population is so diminished. This proposal will fast-track the animals extinction in the wild.

The status of the red wolf could improve if the Service implemented more stringent measures of protections, and provided incentives to encourage better cooperation from landowners, including land purchases or easements. Severe penalties for any intentional take of red wolves should be in place. With only non-lethal removal of problem animals allowed, mitigation of human-caused mortalities, the current range of nearly 2 million acres kept intact (as indicated in “Alternative 2”), and the Red Wolf Adaptive Management Plan reimplemented, the endangered red wolf stands a chance for recovery.

Further, full ESA protections should be afforded red wolves, both within, and beyond the recovery areas, as mandated by the Endangered Species Act. As this is the only wild population of red wolves, and essential to the survival of the species in the wild, the designation as experimental and nonessential is inappropriate. The reintroduced population should be managed under the full regimen of protections under the Endangered Species Act.

Thank you for your time and consideration of my comments.

As always, thank you for your support.

Feature image from photo below by Mark Newman 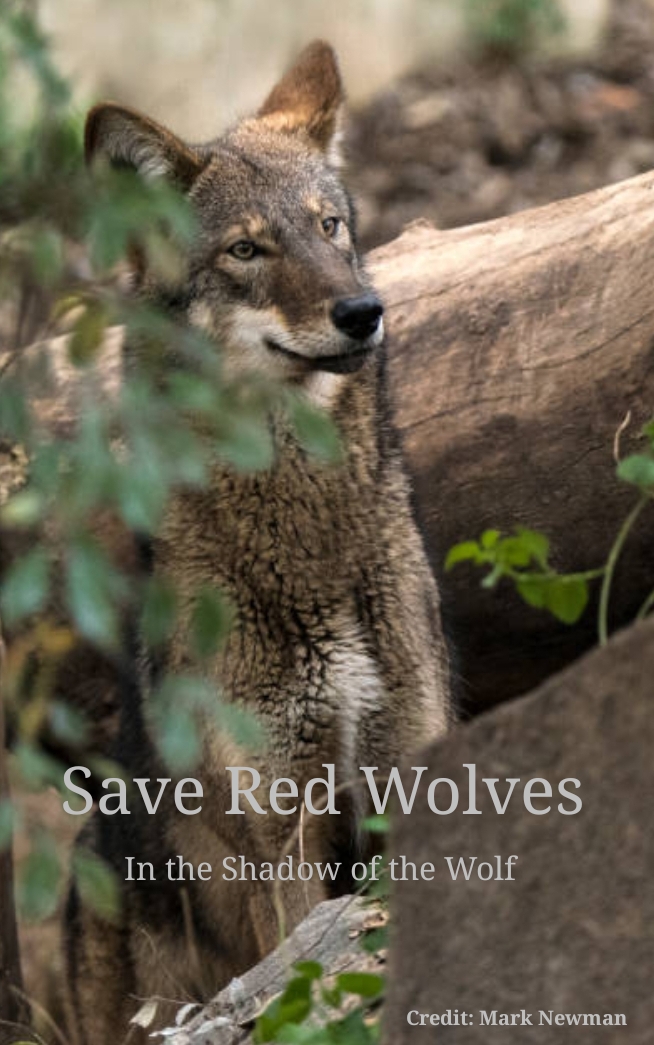 7 thoughts on “Save Red Wolves”