No charges were pressed against the Utah cougar hunter who killed Echo the wandering wolf a year ago today, December 28th, 2014… “I had a shot and took it.” “Echo” | YouTube

The wolf known as 914F and later dubbed “Echo” (named by a 10-year-old boy from Oregon) was shot and killed outside Beaver, Utah, by a hunter who “mistook” the collared female wolf for a coyote. USFWS Investigators concluded, at that time, that the hunter honestly “mistook” shooting the collared, 89 pound, 3 year old female wolf for a 20 to 50 pound coyote — coyotes are not only legal to hunt year-round in Utah, but are subject to a $50.00 bounty.

The wildlife managers’ decision not to prosecute simply reinforces a double standard when it comes to killing endangered wildlife: All hunters have to do is claim they thought they were aiming at something legal to kill.

The gray wolf remains a protected species under the U.S. Endangered Species Act outside of the three state Northern Rockies recovery zone of Idaho, Montana and Wyoming. Federal law provides criminal penalties for those who “knowingly” kill protected animals. But “unknowingly” is a completely different.

The so-called “McKittrick Policy” was enacted after a Montana man gunned down a wolf and later claimed he had thought he was firing on a dog. He was prosecuted, though the Department of Justice  later decided to accept his self-exoneration by claimed ignorance, and has clung to that policy of inaction for years. Sign a petition here, to direct the Department of Justice to revise its self-imposed restriction on prosecutions of those who kill an endangered species and later claim to have not intended to do so.

“The Federal Wildlife Services’ (FWS) recent decision not to imprison, fine, nor even revoke the hunting license of the cougar hunter who killed wolf 914f, aka Echo, is illustrative of the hold that evolution has on us when it comes to predators.

The decision also illustrates how our irrational behavioral biases permeate our institutions and often lead to poor policy decisions, e.g., the Division of Natural Resources’ Predator Control Program, which offers a $50 bounty for each dead coyote and, ultimately, serves as the context and justification for the destruction of wolf 914f.

However, the facts of 914f’s killing underscore the extent of the hunter’s folly and, indeed, the folly of the FWS, for whom a dead wolf, the rule of law and the designation of endangered species would appear to mean less than the hunters’ highly dubious explanation of what occurred”…

“Wolves, coyotes and humans are very different animals, but we are all predators. That our own behavior as such is viewed any differently is not the result of humanity’s inherent or God-given uniqueness or superiority, but of accident, whereby we, as the benefactors of conditions and natural forces we personally had nothing to do with creating, get to say and do anything that we want to our fellow creatures and to the environment, no matter how outrageous, irrational and destructive.”~ Maximilian Werner 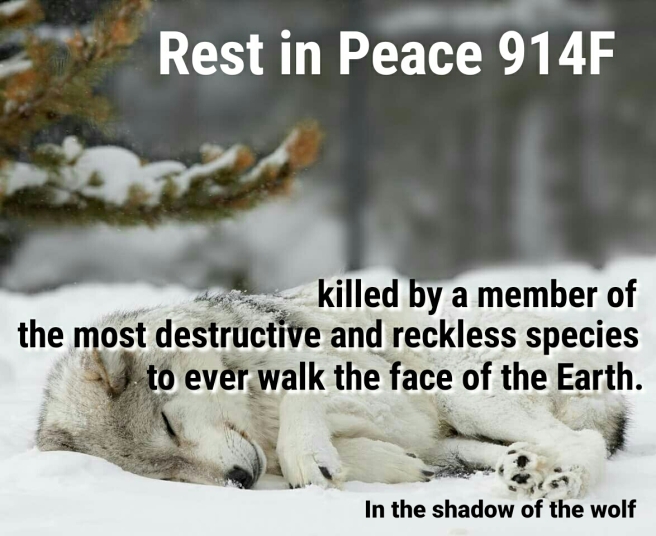 No part of this publication may be reproduced or distributed in any form or by any means, or stored in a database or retrieval system, without the prior written permission of the publisher.